– Introduction to the Language Swap System

The Language Swap System allows you to translate your textual data into as many languages as you wish to support for, output on reports and other output to satisfy a multi-lingual community.

For example, you may want to report your Financial Statements in 2 languages other than your base language in which you work normally. This may be to satisfy outside investors or local tax authorities or regulators. Or you may have many customers that speak another language and want to have their quotation line items in their language.

The Language Swap system is highly flexible but as ideas, these are circumstances where it can be useful:

The Language Swap system works by maintaining a separate database of text translations. These translated texts are linked to key field values in your data, such as specific part numbers, to a particular language and to a particular field of data. Only character type data can be translated and then only from fields that are free-entry and not associated with codes, relationships, or other fields that would corrupt the logical integrity of the system.

The database of Swap Language translated texts is maintained outside your normal datafile in the same way as the optional Keyword and Linked Files databases are. If you choose to switch the Language Swap system on, you will create or open a datafile with the same name as your main datafile with the file suffix .LSW rather than .DF1 (typically they are in lower-case). This file exclusively contains the text translation single file ALTFILE, in many ways similar to the Keyword system datafile.

You can control the translation languages and the extent to which translations are available in the Language Swap system.

It is very simple to get the Language Swap System operational. These are the steps:

The following illustrates the key visual parts if the Language Swap system:

NOTE: Changing the languages after you have created translations will not effect any data. Changing the order will simply change the listing order. A language is only valid if both the code and name are entered. Removing a language will not delete any translated texts you have created in the past – they simply will not be used because you will not be able to select the language in the toolbar list. However, you also will not be able to add any new translations for a missing language. 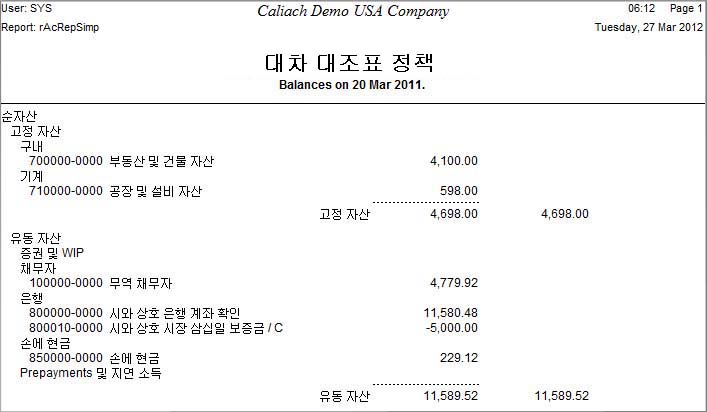 What Can Be Translated?

Only certain files can usefully have texts translated in Language Swap. Typically on Data Maintenance windows where you see this icon

The basic rule is that data texts can be translated that are useful for a one-time translation. There is no point in translating inventory comments, for example, as they are too numerous and of little value outside the business.

It is also important to understand that the Language Swap system enables the translation of data not the program, and things like report literals are part of the program. So, in the example of the Korean translated balance sheet shown above, the top headings are all in the program language of English. An installation of Caliach Vision can, of course, be translated into another language other than English using the Language Management feature, but this is a major undertaking given the size of the program. A better solution to compliment the use of the Language Swap feature is to customise the commonly used report classes, translate the literals on them and have the user select, for example, the Korean Balance Sheet. Then the entire document, rather than just the data is in the foreign language.

In summary, the following table lists the uses of translations of various data:

ScratchPads and Workflow Triggers and Alerts

You can use the Language Swap System to display language translations directly on the ScratchPads and Workflow Triggers and Alerts or, for that matter any custom report. To do this you use a function $ctask.tLangSwap.$GetSwapText (pKeyValue, pColName, pLanguage, pNormalText). The four parameters are pKeyValue which is the identifier of the record and needs to be prfixed with pRow., for example pRow.PTMPTNO for parts or pRow.CUSCODE for customer. Then the Column Name of the field in the record you want translated. Then optionally the language code for the translation. If this is not entered explicitly the Language Swap toolbar choice of language is applied. Finally, again optionally, the nomal, or un-translated text. If there is no translation available, this text will be returned.

For example, a calculated Parts ScratchPad field calculation could be

would list all Korean translations of the part description in a column in the Parts ScratchPad. Note the pColName needs to be a quoted string. Using (pRow.PTMPTNO,’PTMDESC’) would apply the Language Swap toolbar choice for the column at the time the part was added to the ScratchPad.

As another example you could add a column to the General Ledger ScratchPad to show a translated account description. The calculation code would be:

Reports that were derived from pre-V4 designs will not support Language Swap without functions being added. The easiest way to achieve this is to add to the Record $print method:

pDataRow is either a row variable or a list variable with the current line set. pFile is a quoted string of any number of tables, comma seperated.

For reports to support Language Swap they need to be tailored with code that implements the swap process. Various functions are available to implement this.