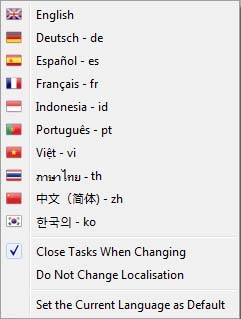 From V4.10 of Caliach Vision the program can be dynamically translated into one of many major languages as you work with it. This menu controls which language is currently in use.

NOTE: As of V4.10 Caliach has released all supported languages free-of any additional cost. However, Caliach Limited reserves the right to introduce additional license charges for language support in future major versions of the program.

First, do not confuse Program Language with Language Swap. Program Language switches the language the program appears to the user in, whereas Language Swap is a way of having multiple language versions of text in your data. The two can be used together to provide all sorts of configurations and results but they are completely independent of one another

Caliach Vision has a number of language-sensitive texts which are as follows:

Switching from one Language to another has the following effects:

NOTE: If you want truely uninterupted language change un-check the Close Tasks When Changing menu option and check the Do Not Change Localisation menu option. This will mean no tasks or windows will close and all menus, windows, toolbars will flip language as you view. You will not see date months and days change, or other localisation, nor will task context menus change. And you will find some texts on windows will not change if they are derived from the Strings file when originally opened (for example report selection lists).

CUSTOM CAPABILITY: Site customised reports typically start as a duplicate of one of the standard reports with much of the contents unaltered. They too will be traslated based on their original class name if, and only if, there is a method named $MasterClass in the report which returns the original standard class name with a single code line of:

Caliach has a sophistigated system of maintaining Translation Databases in line with upgrades to the program and contributions from the Crowd-Source Language Improvement system.

With the Change Management System (ProgCode.upt) program upgrades contain all supported languages for text that may have changed and during upgrade the the DynamicLang-<locale>.db and Strings-<locale>.stb files will be updated automatically to accomodate the new improved texts.

When you change language to non-English for the first time each day a check will be made to see if there are any language text enhancements on the server. If the server has not recently been updated, and you have Internet access, a check will be made to the Caliach web site for any recent improvements. If such improvements are found for the language they will be downloaded and the server will be updated, then finally your local database will be updated too. This approach both minimises wasted Internet traffic while ensuring you have the most up-to-date translations and user contributions.

The Languages listed in the menu are only those for which the program has a DynamicLang-<locale>.db file in the Extras folder. If a file is not there the menu will omit that language. If you do not want the menu to show a language, simply remove the database file for that locale.