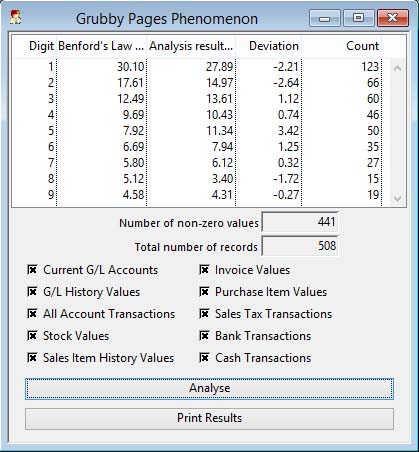 Why numbers start with 1 more than six times more frequently than they start with 9?

The earliest known report of this curious first-digit phenomenon was made by the astronomer and mathematician Simon Newcomb (1835-1909). He observed that the pages of heavily used books of logarithms were grimier at the beginning than at the end, suggesting that fellow scientists tended to look up smaller numbers more often than larger ones. Hence the phenomenon’s nickname of the “Grubby Pages Theorem”.

Why Benford’s law applies to a wide range of data (though not all) has proved a tricky question. It wasn’t until the mid-1990s that Hill provided a mathematical basis for Benford’s law. He also demonstrated that it is not effected by scale. An accounts list in US$ will have the same distribution if you converted all to Euros first. Strange but true!

It appears that it works for large enough groups of numbers arising through some sort of process (human or natural) where they are not mathematically random or artificially constrained. A computer random number generator would produce an equal distribution of 1 and 9s. A list of the number of fingers on the hands of the people in a crowd will obviously be biased towards 5 because of genetic constraints. See the World Wide Web for more info on the Maths.

So how can this be useful? Tax authorities and Auditing specialists have found that it is a very useful rough guide to detecting fraud. If fraud is being perpetrated, it is rarely done in line with Benford’s Law as it acts like a constraint and distorts the normal distribution. Again, strange but true!

Caliach Vision implements it with a large range of options for analysis.

You can check any of the choices and click Analyse. The system will scan the appropriate files and record a distribution pattern of the first significant digit. The list will show the sum for all analyses. Print the report for a breakdown of each. With a large enough number of records, you will find it intriguingly accurate, assuming of course there are no artificial constraints!