Sales, Jobs and Purchase Orders can be prepared in currencies other than the normal system currency. Any currency that you wish to use must be defined in the currency file.

Currency maintenance is available either in the “System Manager” section or in the “General Ledger” menu of the “Ledgers” main menu.

Each Customer and Supplier can be given a default currency for Sales, Jobs and Purchase Orders.

Parts can have up to five currency prices. For this, the currency symbols must be defined in the Company Details Maintenance window.

Within “Ledgers”, General Ledger accounts can be foreign currency accounts and within Account Payable and Receivable accounts mixed currencies can coexist within the same account.

The window has 3 tab panes. 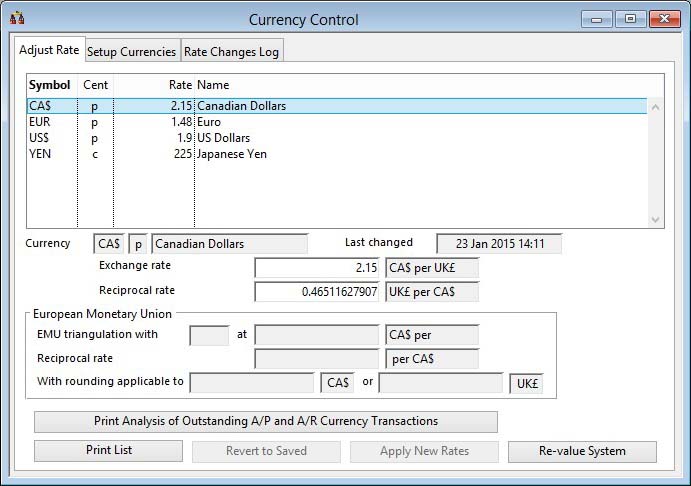 Use this tab to adjust exchange rates.

This note is applicable to users concerned with “Euro compliance” when within the member countries of the European Union.

There are numerous interpretations of what “Euro compliance” really means. The only enforced compliance relevant to accounting systems revolves around currency conversion within currencies that belong to member countries of the European Monetary Union (EMU). The rules, devised by Brussels bureaucrats and civil servants of member states, were enacted by the Mastericht Treaty and is known as “Triangulation”.

A further requirement is that all exchange rates must be expressed to 6 significant digits rather than the standard 4 decimal places.

These two requirements lead to significant difficulties when applied to a conventional database accounting system. Firstly, the calculation itself is different depending on the currencies involved. Secondly, the EMU conversion result depends on the value of the transaction due to the intermediate rounding stage. Thirdly, the resolution of exchange rates is not consistent in terms of decimals (e.g. Irish Pound 0.796244, Italian Lira 1957.61).

The bureaucrats of Brussels clearly were not systems designers and gave scant regard for the costs of implementing their convoluted ideas. Compromises must be made, and Caliach have made the following:

2. Currency conversion is always by simple multiplication or division by the direct exchange rate. Triangulation is not implemented at a transaction level.

3. Triangulation is provided for in the generation of practical exchange rates.
The above does not apply to “conversion” of the entire system from a non-Euro base (local) currency into Euro. This will require a utility that may apply triangulation as part of the conversion process. 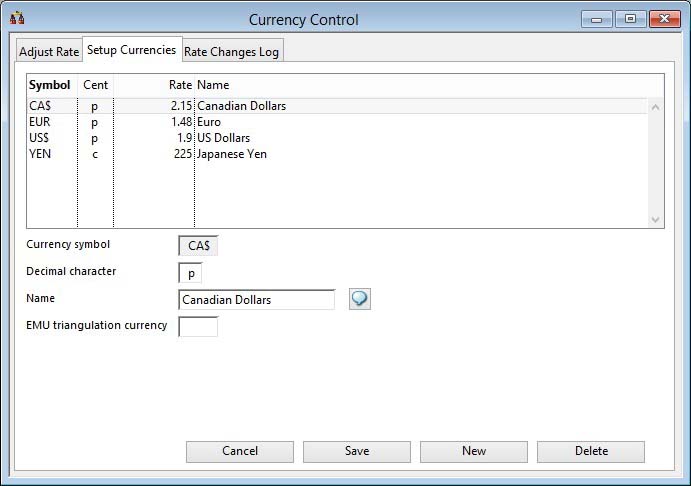 Use this pane to setup a new currency. 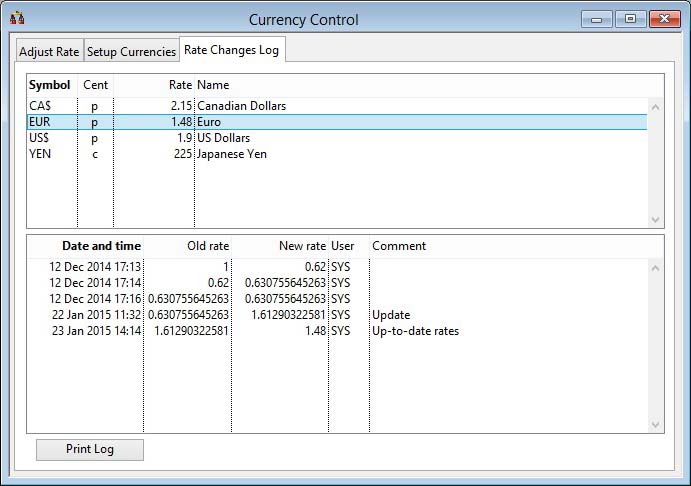 Use this pane to view the logged history of rate changes.