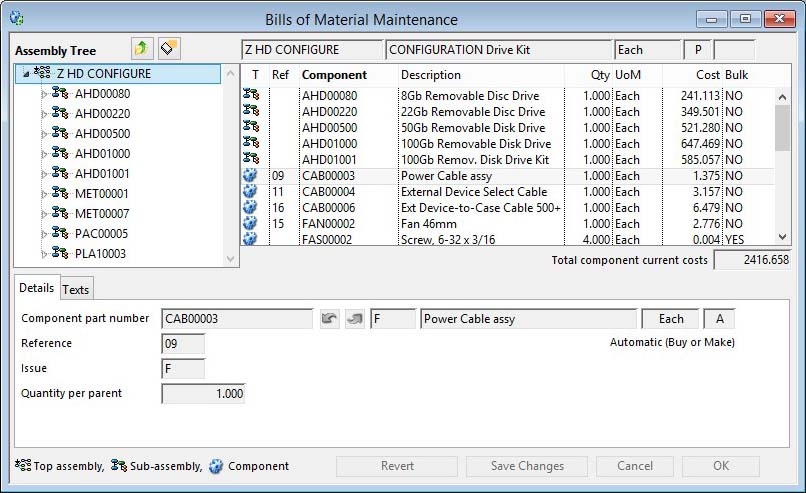 The Bill of Materials Maintenance window contains an assembly tree list that can be populated using drag and drop from the parts ScratchPad or directly by using the Select Parent function on the BoM menu. When an assembly number is selected in the tree list the parent’s component list is built and is displayed. If there are potential conflicts with orders the Parent On-Order Status window will open to warn you.

To create an assembly in the first place, select the part number or drag it into the list and select it. Then add components to the list.

The window shows component current costs under the list and a total for the parent below the list. Note that this is NOT the total cost value for the parent as it ignores costs associated with the assembly process route and any receiving overheads.

The window has 2 tab panes.

This pane enables you to view the component details.

To edit the details, double-click on the list line. Confirm with an OK and after changes are complete Save Changes.

To view the component structure texts.

There are two reasons why you may want to create BoM Structures where some components have negative component quantities.

One example (A) is a non-obvious way of handling final assembly exceptions or customisation. In this case, suppose we are making a standard car with black tyres and a customer comes along and says that he will place a large order but only if we provide the car with green tyres. The tyres are on the axles which are on the chassis so they are deep within the BoM structure, but as we have anticipated this possibility and our car is made on a production line as a single large BoM Assembly it is easy for us to make the standard car with black tyres a phantom kit. Then we create an end product with a single BoM component of the standard phantom kit assembly. To make the green-tyred car all we need to do is to duplicate the standard black-tyred car end-product assembly and add two components to it’s BoM; 4 green tyres and minus 4 black tyres. When the kit is issued the minus 4 and plus four black tyres in the phantom kit resolve to zero black tyres and we are left with the standard kit without tyres plus 4 green tyres (substitute 5 for 4 if there is a spare!). The main value of this is data efficiency and transparency as the ‘specials’ are all in the top level BoM which will be small, having only the standard phantom kit and any variants. Also any change to the basic common design means only a change to the phantom kit after which all end-product variants will reflect the change.

Another example (B) is where the production process results in a predictable return of stock, perhaps where it has been consumed at an deeper level of production, such as tooling or complex by-products that fall outside the normal by-product functionality.

The following illustrates a non-negative simple build followed by A and B scenario illustrations. 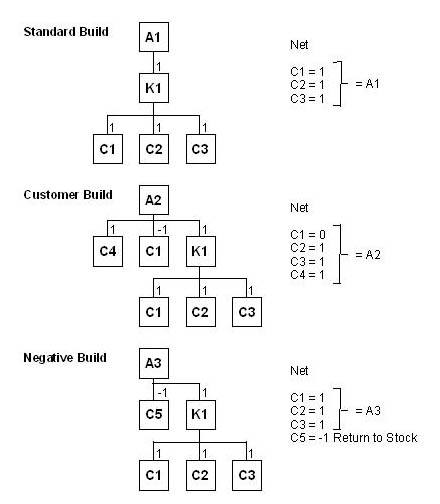 Caliach Vision (V3.1013 onwards) allows negative component quantities through a system option optBoMAllowNegQty which can take the value 1, 2 or 3. This option works in conjunction with the optBoMZeroQty system option which, if 1 or YES permits the entry of zero quantity components. The rules are as follows: