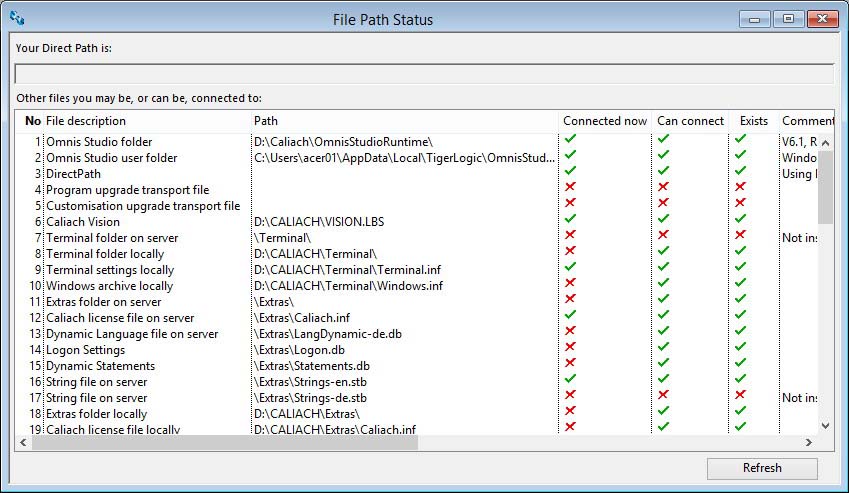 You can access this function from the File — System Manager — Monitor window by clicking on the File Path Status button to the right of the main datafile path shown towards the top of the window. Before opening it performs it’s file analysis.

In a multi-user environment, the data, of course, has to be held on a central server so it is common to all users and the technology (network/server) has to be capable of handling potential conflicts between users. Typically, 1 and 2 above are loaded onto the user’s computer with the datafiles on a server, but other configurations are possible in the right circumstances.

With V5 onwards, database connection depends on the client-server connection mechanism of the server engine involved. Prior to V5 there are two methods available to connect to the datafiles to accommodate different mixtures of user operating systems:

NOTE: Your cannot reliably mix these two methods of connections. Either ALL users are on the Direct Attachment method or ALL are on the ODB method.

Whichever, connection method you are using, this File Path Status window will list all the connections that the operating Caliach Vision is, or can, make to external files. The Path is the term used for the hierarchy of drive, folders (directories) and file expressed as a line of text with a character separating the levels. Depending on whether you are running on a Windows, Mac or Linux machine these are : and / respectively.

With the ODB specifically, the path to the datafiles will is different as it is not an file system path. It will appear in the form:

The first few entries in the File Path Status list cover the locations of the Omnis Studio executable, Caliach Vision library and other libraries that are open and the main data file (and segment) connections. Thereafter, the lines are reporting all the additional folders and files that the program needs to be able to access, or could need to for particular functions. There are many optional configurations for these other files that can apply depending on the choices made. For example, the Extras folder containing the Caliach license and strings files can be held either locally to each user or centrally on the server (making re-licensing more manageable, for instance). The File Path Status analyser looks at all these optional locations and reports their status, so if some are shown not to exist, that doesn’t mean that anything is necessarily wrong – it depends on context.

NOTE: In the File description column, the term on server refers to the file or folder located centrally, either by being alongside the datafiles, or in the case of ODB datafile connection in the DirectPath. The term locally implies that the file or folder is in the user’s Vision library folder.

Was this article helpful?