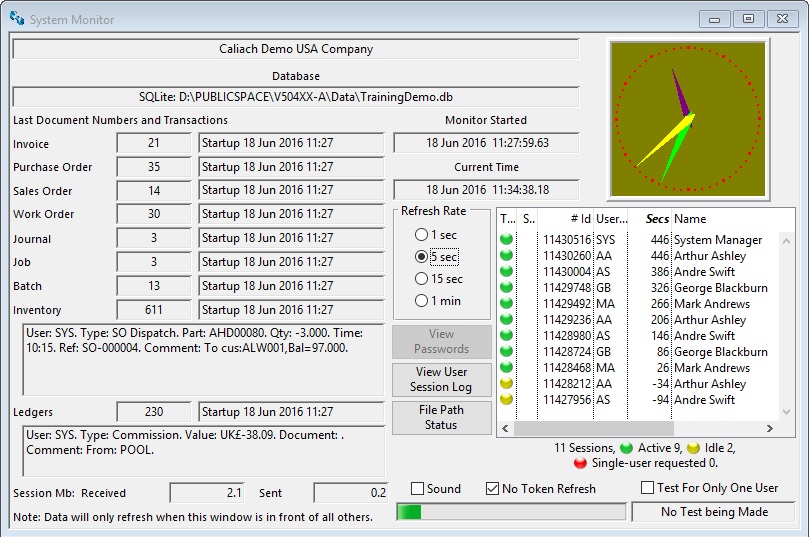 This window shows current user and document status and in real time identifies user activity in creating documents, transactions and when they log on or off. It is designed for system manager administration.

You can set the Refresh Rate and, if needs be view the logged-in users passwords. Because of this, only trusted users should have access to this window.

NOTE: Data will only be refreshed when this window is in front of all others.

NOTE: V5.10 changed the way the user-limit was recognised and the operation of this window changed significantly.

The Current User List shown at the bottom right will contain all current user tokens that have been granted and their status. Users are identified by their User ID and a unique number. The latter is needed in case two users logon using the same User ID, which, while not recommended, is permitted. When a user logon is performed, that session is granted a token. When the user logoff is performed (when there is a clean exit) the token is removed.

However, the token has a lease-life typically of 15 minutes. During normal user activity in the program this is regularly refreshed with the lease-life extended automatically. However, if a user becomes inactive and the lease-life is passed, the token and user are considered idle.

An idle user becoming active again can re-activate that token, unless in doing so would exceed the licensed user limit, or a single-user session is waiting or in progress.

If, on a user logon, the user finds ALL tokens are idle then all tokens are deleted, before the logon user is granted a new token. In this way rogue user entries, where no clean logoff was performed, can be cleaned out of the system. (Note: When this happens a comment is placed on the User Session Log.)

For an extreme example, say you were running with 12 users on a 12-user license and the entire factory power fails for a minute or so with all user computers affected. Immediately you will not be able to logon as you would be the 13th user. If you waif for over 15 minutes before logging on however, all the rogue tokens will be removed. For a deeper explanation of the multi-user control mechanism see the IntroSQL Introduction to Client-Server SQL help.

There are a number of options that effect this system:

Was this article helpful?